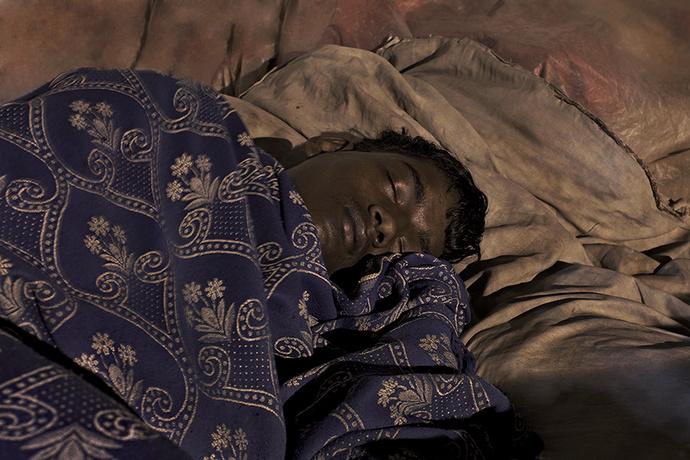 The pictures in Ether, Sheikh’s first project in color, were made as a way to honor the experience of death and to try to comprehend its significance. Benares (Varanasi) is one of India’s sacred cities, where many Hindus come to die in the belief that they will find salvation.

As he walked its streets at night, Sheikh observed sleeping figures, shrouded in blankets, lost to an oblivion that seemed, in that holy city, to offer a simulacrum of death. In watching these prostrate figures, which hover in the imagination between a dream state, sleep and death, Sheikh recalled his own experience with his dying father and their passage together through his father’s final days.

He remembered it as an invaluable period of emotional connection with the body and soul of the person he knew and loved, a connection that reached back to his paternal ancestors, who had travelled south from northern India a century before.

To lose oneself in sleep is to abandon the senses and leave the way open to a dream state in which mind and body separate. Just as, in death, the soul leaves the physical body behind and takes to the air, becoming ether.

The author Aveek Sen has kindly offered his essay, Lying Down, to accompany the Online version of Ether.

English
Previous The Conflict Shoreline
Next Portraits
© Fazal Sheikh – The texts and images on this website are protected by artist’ s copyright.